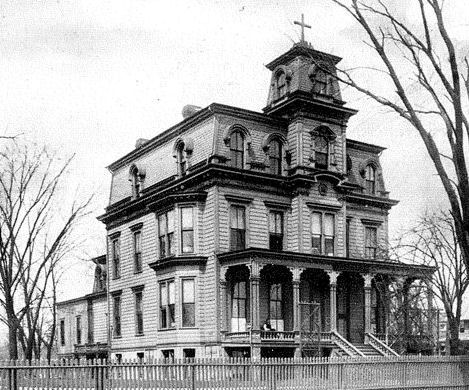 Blue Island's Saint Francis Hospital
A Heritage Of Healing
German born Ernst Uhlich came to Blue Island in 1849. A carpenter by trade, he switched to buying and selling real estate and prospered. He married Sophia Krueger in 1856 and they soon built one of the show homes being built in the village in the area east of Western and north of Vermont. Their palatial estate was on the west side of Gregory Street spanning the block between York and High Streets. In September of 1904, Reverend Francis Rempe wrote to Reverend Father Faerber in St. Louis saying that he wanted to establish a hospital in Blue Island. He said that he had some desirable property and wished to know if the Father could advise him as to how and where he might find Sisters to take charge of same. The Reverend Father thought this was a good opportunity and consulted with the Sisters of Saint Mary Reverend Mother about the possibility of undertaking this new mission. After deliberation, the Reverend Mother and the Sisters concluded that it would be a good idea to establish a hospital in Blue Island since there were none in the city, and since the town was so close to Chicago. In November of 1904, Reverend Rempe secured the Uhlich Property across the street from the church, for $30000. The first payment was furnished from the Motherhouse in St Louis and a Deed of Trust was given for the remaining $20000.


On November 29th, Sister Margaret Mary Noelker, with Sisters Alexia Koehne, Columba Heyden, Silveria Heinz and Lioba Baumhof arrived in Blue Island and were met at the station by Miss Margaret Rempe; after breakfast at the priests house they went to their new home. The hospital property had a 240 foot frontage by a depth of about 300 feet; it had a large double frame dwelling two stories high with a fine basement and large attic. They immediately began to make the necessary changes to the household as they prepared living spaces for themselves.

Over the next few days the Sisters were introduced to Mayor J. Zacharias and to City Treasurer J. Heckler who went with them to solicit subscriptions for the hospital from Blue Island's most prominent businessmen; they also began planning the building's renovation, including the installation of a new steam heating plant, began nursing in the homes of Blue Islanders where their abilities were needed the most.

The Sisters faced many hardships in their new role; the house contained empty apartments and poverty made itself felt and seen everywhere. During the months previous to the opening of the hospital for patients the Sisters often did not know where their next meal was coming from. But their hearts were as light as their purse and they trusted that God would provide for their needs and this confidence was always rewarded One Saturday morning as the Sisters were busy taking nails out of lath and piling them up so that the carpenters could re-use them, Dr. Edward Doepp came over and asked what they would have for their Sunday dinner. The Sisters answered that they had not thought of that. He left and a short time later returned with two ducks for their Sunday dinner. Often when the Sisters returned from Mass they found that Blue Islanders had left a dozen or two eggs on the table, sometimes home-made sausage or home-made bread and cake.

On the day before Christmas a large box containing a beautiful picture of St Francis was brought to the house, as a present from Father Rempe. It was placed on a small table which had been left by the former occupants. This served as their oratory during prayer time and in turn was used as a reception room, dining room, and laundry.

In March of 1905, Reverend F. A. Rempe blessed the renovated building and it became Saint Francis Hospital. On the following Sunday it was opened up for public inspection and the first patient; local grocer William Thoemind came in that evening with an injured knee.

Within a few weeks the necessity of an operating room became evident. Plans were drawn and work on it was begun at once. In the fall several rooms and a laundry were added to the building. From twenty-five to thirty patients could then be accommodated. The nursing of the sick was carried on in this building for the next ten years. But because they could no longer accommodate all the patients requiring admission, the erection of a large modern hospital could no longer be postponed. 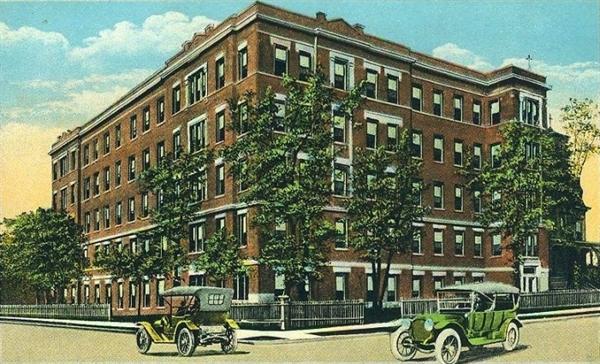 Plans were drawn in 1914, and the boiler house and laundry were built the same year. On March 19, 1915, ground was broken for the hospital. The cornerstone was laid on May 3rd by the Rev. Paul Rosch. About a year later on Memorial Day, May 30, 1916, the new St. Francis hospital was dedicated with appropriate ceremonies. The hospital was a fully equiped modern structure of four stories complete in every detail. It contained 100 rooms, about thirty of which were furnished by societies and families in memory of a beloved deceased member of the family. The Former Uhlich Home, used for ten years as a hospital, was now the residence of the Sisters who were operating the hospital and ministering to those afflicted. The steady increase in the number of its patients was ample proof of the efficient and satisfactory care that is maintained as the standard of this hospital. The entire community of Blue Island and its surrounding districts, regardless of religious affiliations, benefit by the self-sacrificing efforts of the Sisters of St. Mary.
St. Francis Hospital by 1943 had 110 beds and in that year was approved by the American College of Surgeons for residences or fellowships. It was also approved by the Council of Medical Education and Hospitals of the American Medical Association. On July 21, 1945, Blue Islanders saw the first shovel of earth turned for the new addition to St. Francis Hospital. As the 60-bed addition neared completion, it was announced that an open house would be held July 4, 1950 in the addition. Samual Cardinal Stritch has been scheduled to bless and dedicate the addition in ceremonies on July 3. Sister Mary Florentine of St. Francis Hospital stated that more than 2,000 people visited the new addition. 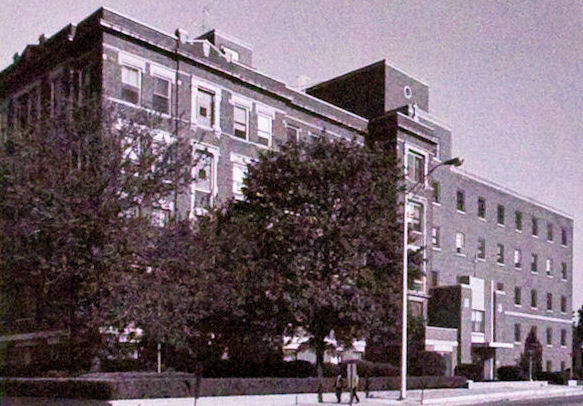 This picture of St. Francis Hospital was taken after the addition of the north section. A drive to add another six million dollar addition was soon under way. In 1962, the hospital again announced plans for expansion. The planned addition was for a new building accommodating 248 new beds, providing a physical medicine department, a control supply department, an enlarged pharmacy, a staff room for doctors and personnel, and large administrative offices. 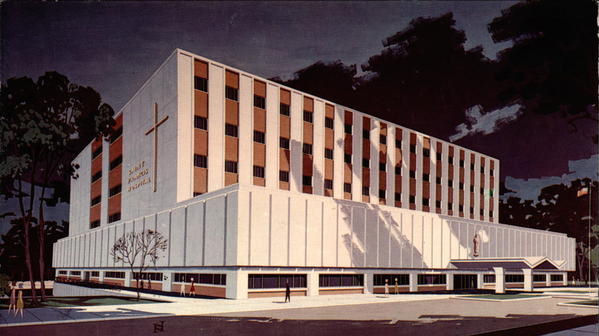 In 2001, St. Francis Hospital expanded once again. The project was completed in August of 2003 and involved 55,000 square feet of new construction and more than 46,000 square feet of renovation. The addition included a new Emergency Department, a Women's Center, Preadmission Testing Center, a Gift Shop, a new Chapel, Executive Offices and Diagnostic, Cardiology, Endoscopy and Surgery sections. The Sisters of Saint Mary's felt it was important that the renovation's design incorporate religious elements in a way that would not alienate the diverse community the hospital serves. It was important that the building reflect its religious origins without directly copying those found in places of worship. The solution involved using tall windows, pieces of the original chapel's stained-glass windows, circular construction, neutral tones to create a welcoming space while retaining a link to the facility's past.

Saint Francis has long been a nationally recognized hospital, but in 2008 local and nationwide changes in the economy and medical care brought the institution to the verge of bankruptcy which forced the Sisters of St. Mary (now known as the Franciscan Sisters of Mary) to relinquish ownership of the facility.

After the sale, Saint Francis Hospital was renamed as MetroSouth Medical Center. It was hoped the rebranding would help change the century old charity-based method of operation with a business-driven method. But current public commentary and media coverage shows otherwise. Even though U.S. News & World Report ranked MetroSouth as one among the top 15 percent of hospitals in the state of Illinois, the most recent sale landed the hospital and the City of Blue Island in a legal battle that has again brought the institution to near extinction.